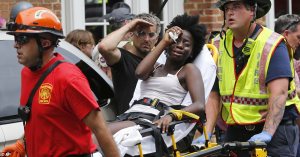 A driver has intentionally plowed into a group of anti-fascist protesters hitting up to 20 people in Charlottesville, Virginia, after violent clashes erupted between white nationalists and activists on Saturday. Video shows the Dodge Charger accelerating into the crowd throwing bodies into the air as people scream before reversing at high speed – it is not known how many people have been injured. It came after violent clashes erupted as hundreds of white supremacists including armed militias marched into Charlotesville sparking violent confrontations with the counter protesters. Police cleared the scene with tear gas but the violence continued. Horrifying video from the scene of the car attack shows blood spattered on the vehicle’s windshield as victims desperately call out for medical help. A counter protester had allegedly thrown a rock at the car, causing the driver to swivel around and ram into people and cars in its way, before driving off. Local police reported there were at least 20 people hit and three vehicles were involved in the crash. People are heard screaming and crying in the aftermath of the smash, as blood was splattered on a car’s windshield and victims were desperately calling out for medical help.