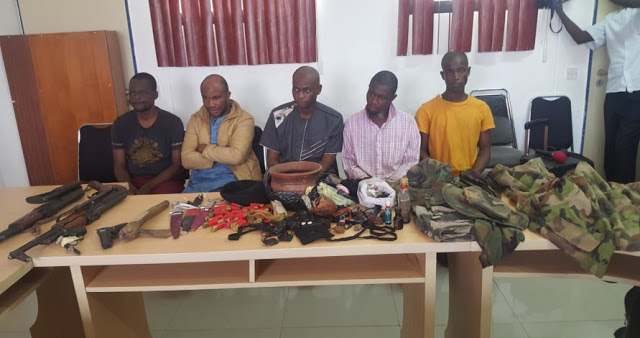 The police said on Tuesday that five suspects have been arrested in connection with the kidnapping of Governor Yahaya Bello’s mother.

The governor’s mother, Hajia Hawawu Bello was abducted by some gunmen in Uvete, Adavi local government area of Kogi on May 29, 2014.

Governor Bello was the Managing Director of Fair Plus Transport Services at the time of the incident.

The Force Spokesman, Jimoh Moshood, disclosed this at a press conference on Tuesday in Abuja.

Others are – one black Beretta; two plastic guns; three sharp knives and one axe.

He said the suspects had confessed to the kidnapping of the governor’s mother and other robberies in FCT, Kogi and Niger.

The Force spokesman said efforts were being intensified to arrest other fleeing members of the gang while the suspects would be charged to court on completion of investigation.

He enjoined members of the public to cooperate with the police to prevent crime and criminality in their localities.