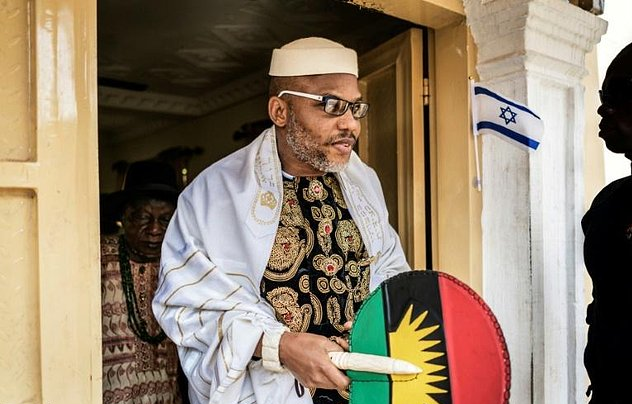 The leader of the Indigenous People of Biafra, Nnamdi Kanu, on Monday, said Igbo must not vacate the North, or any other part of the country, as a condition for the actualisation of the agitation for Biafra.

Speaking in an interview with some journalists in Enugu, the IPOB leader reacted to the ‘quit notice’ issued to Igbo in the North by a coalition of Arewa youths,

“You are aware that Scotland is seeking to leave the United Kingdom? Are you remotely implying that every person from Scotland, who lives in England, should now return to Scotland?
“Britain just left the EU. Are you now implying that every British citizen in the EU should come back to Britain in order to finalise that process of extraction of Britain from the EU?”

Kanu noted that what he described as “poor education” was responsible for the impression that Igbo must leave other parts of Nigeria in the event of the actualisation of Biafra.

Asked if Igbo in the North should ignore the notice to quit, the IPOB leader stated,

Kanu insisted that the governorship poll in Anambra State, scheduled to hold on November 18, 2017, would not hold unless the Federal Government acceded to pro-Biafran agitators’ demand for a referendum.

Asked if he was not bothered that Ohanaeze Ndigbo had overruled his call for the boycott of the poll, Kanu said he was in charge of the people “100 per cent.”

“No, I’m not (bothered) because the people are with us. We control the people 100 per cent and come Anambra, on the 18th of November, 2017, the whole world will be amazed.”“We are entirely peaceful. We are not stopping anyone from voting. If you want to vote, you can go and vote. We are democrats,” he said.