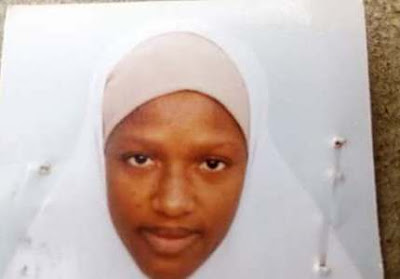 A lecturer with the College of Education, Maru, Zamfara State, Mallam Yakubu Maradun, is currently helping the State Police Command to unravel the circumstances surrounding the murder of his wife, Malama Naja’atu Abubakar.

It was reported that the body of 25-year-old Malama was found on Friday, July 14 after she was declared missing since Tuesday, July 11.

According to Nigerian Tribune, the decomposed body of Naja’atu was discovered in her matrimonial residence under a very unusual circumstance four days after she was declared missing.

A source told the news site that Naja’atu left home last week Monday on the permission of her husband to go to a bank to obtain her Biometric Verification Number (BVN) number, but did not return home, and this prompted her husband, friends and relations to search for her.

The search for the missing lady gradually became intensified for four days, until when last Friday, a close relation visited the residence of the missing woman to sympathise with her husband.

The source also revealed that, upon entering the house, the visitor perceived a very strong odour of something decomposing. The husband explained that the odour could be the smell from a broken toilet.

The source further narrated that the visitor insisted that the room from where the odour was coming should be opened to verify what it was.

“It was shocking that inside the room, the decomposing body of Naja’atu was found on bare floor covered with rags, while flies were hovering all over her, just as the husband became dumbfounded,” the source said.

The spokesman of the state police command, DSP Shehu Muhammad, confirmed the incident, saying investigation was still ongoing in order to unravel the case.