A loud mouthed skinny man got more than he bargained for when he disrespected a big woman at the mall.

In a video which has been shared online, the man can be seen raising his voice at the woman and using derogatory terms on her. He took it far by hitting her in the face and the woman reacted in self defense. A fight broke out immediately but the woman was able to get him to the ground and sat on him, overpowering him.

The fight didn’t end there but continued after they were off the ground, with the man, hiking the woman’s dress up and making sex motions while grinding against her. What’s sad is that those at the mall laughed and recorded without trying to separate them. She stopped beating him and stood up only for the man to come at her again, she fought back and beat him again, left him and continued paying for the what she bought at the store while the man rained abuses on her, she ignored him and left, the man followed her still.
I guess he wants some more lol 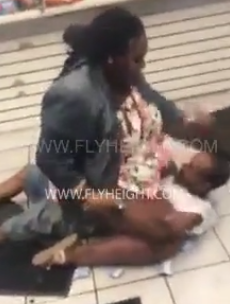