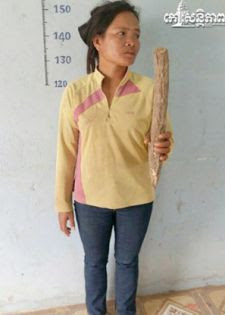 Pursat provincial police, in Cambodia have arrested a 35-year-old woman who allegedly fatally beat her husband with a stick during a domestic row.
Sen Pov was taken into custody after her spouse, Say Siemly, a 47-year-old primary schoolteacher, died on Saturday, July 15, as his family attempted to take him to Phnom Penh for medical treatment, according to police.
District Police Chief Vorng Savet said the couple, who live in the district?s Ptas Rung commune, were known to drink and get into fights. He said after a row on Friday, Pov left to sleep at her mother?s home but returned early Saturday morning, when the altercation resumed and escalated.
After being threatened with a knife, Pov, who told police she could not bear the abuse, struck her husband in the head twice with a wooden stick.

The couple went to bed, but the serious nature of Siemly’s injuries soon became apparent. He was first taken to the district hospital before he was taken to the capital, but died en route.

Mea Mol, Director of the Pursat Serious Crime department, said Pov has been sent to the provincial court.