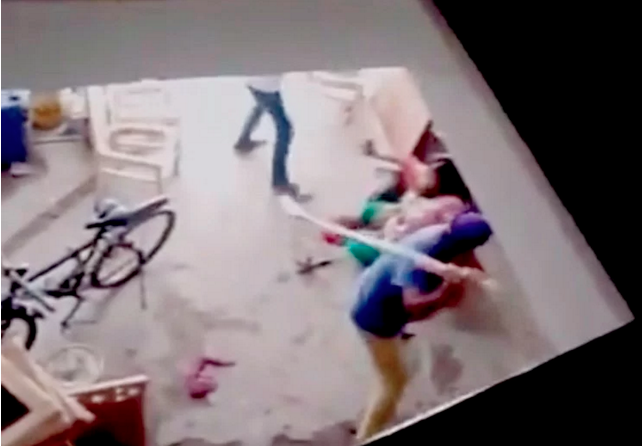 Local reports in Katalwi, Punjab, suggest that Meena Kashyap, 35, was also attacked as part of a dowry dispute.

Footage shows her cowering and screaming in pain as she is hit with hockey sticks by two men believed to be her brother-in-law and a friend of his.

Her husband’s family had recently found out that she had previously made complaints about them in April saying they had treated her with violence.

Ms Kashyap is said to be in dispute over a dowry of £8,300 given to her by her in-laws but then when she gave birth to a girl her husband’s family were angered.

She has been beaten a number of times, according to the Hindustan Times.

Police are bringing charges against her husband Daljit Singh, his brother Kamaljeet, and a friend identified only as Gaurav.

The charges include trespass and ‘voluntarily causing hurt’.

Her father said: ‘We had complained about the issue last year itself but nothing was being done regarding that.

‘They have been married for the past two years now and have a girl child. Their family asked for 700,000 rupees for dowry.’