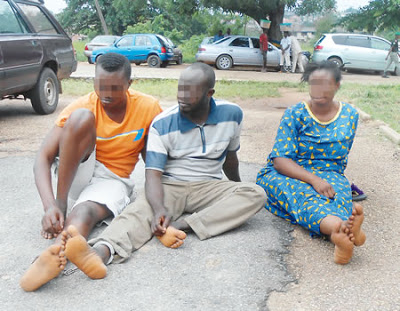 The Oyo State Police Command has arrested one Mrs. Bukola Ogun for allegedly faking her own kidnap with the aim of extorting money from her husband, and to also persuade the man, a citizen of America, to relocate her to the States.
The housewife was recently paraded alongside 12 other suspects for various crimes by the Oyo State Commissioner of Police, Mr. Abiodun Odude at the Police Headquarters, Eleyele, Ibadan.
According to the Police boss, the 37-year-old businesswoman was arrested with two men who she had conspired with, among whom was her cousin, Kayode Adepoju, who helped in orchestrating her own kidnap in order to fraudulently obtain money from her husband.
The commissioner told journalists that the incident happened at about 7:45 p.m. on Tuesday, July 4, when three armed hoodlums stormed the residence of the supposed victim and kidnapped her to an unknown destination.
Barely four hours later, the suspects contacted the victim’s husband, demanding for N10million as ransom as a condition for his wife’s release.
Unknown to the husband that the kidnap was actually arranged by his wife, he reported the case to the police, and upon the receipt, operatives of the Special Anti-Robbery Squad (SARS) began a manhunt for the hoodlums.
During an intensive investigation, two suspects were arrested, and they let the cat out of the bag, as operatives were stunned to discover that the victim was the architect of the fake kidnap.
The woman, for the three days she was away, lodged in a hotel at Imalefalafia area, Ibadan, while efforts were on to rescue her, but after two of the suspects were eventually arrested in their criminal hideout at Imalefalafia area, they confessed to the crime and the mastermind was arrested,? the police boss said.
Confessing to the crime, she said she called her cousin, Kayode, informing him that she wanted her husband to relocate her to the United States, so wanted to stage her own kidnap so, after her rescue, her husband would be left with no option than to send her abroad.
So I left home on Tuesday, July 4, and returned on Thursday, July 6, acting as if I was kidnapped. It was then that my husband started calling about that I had been kidnapped before finally informing the police.
Everything is still like a child’s play; he is an American citizen and I just wanted him to relocate me to the US. I told the gang to demand for N10million from my husband; I knew he could not afford that kind of money, but just for the whole plan to look real.
And within the three days I was away, I lodged myself in a hotel, but I regret everything now, Mrs. Ogun, who had been married to her husband for six years with two children.
On his role in the whole case, Mrs. Ogun’s cousin, Kayode, said the woman just called her one day, informing him that she wanted to stage her own kidnap so that her husband would agree to relocate her to the United States since he is a citizen.
According to him,  ‘she told me to find one of my friends who has a car and we would come to her house in the evening of the day we wanted to stage the kidnap.’
When we even got to her house, she was the one who walked out herself and entered the car we brought, and we took her to the hotel where she lodged for three days.’
After that, we called her husband, asking for N10million ransom, just to make the whole plan look real, but we didn?t collect anything from him.’
However, I was arrested the following day after she returned home; policemen came to my office to arrest me, and we had no option than to tell the police the truth, Kayode said.
The suspects will be charged to Court pending on when investigations are done.