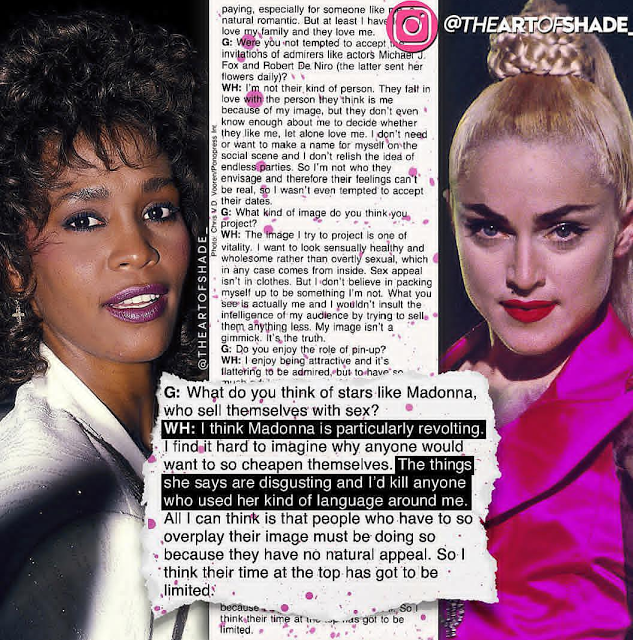 In a never before seen letter that is now up for auction, singer Madonna called her biggest rival at the time Whitney Houston a ‘horribly mediocre’ singer after Whitney granted an interview in 1988 calling Madonna revolting.

In the letter, the singer describes Whitney Houston and Sharon Stone as horribly mediocre, saying she would rather die than be these women.

I have made so many people angry that I’m being punished and basically made to be quiet and sit in a corner, while other less interesting and exciting people are reaping the benefits of the roads I’ve paved. Maybe this is what black people felt like when Elvis finally got huge.

It’s so unequivocally frustrating to read that Whitney Houston has the music career I wish I had and Sharon Stone has the film career I’ll never have.

Not because I want to be these women because I’d rather die, but they’re so horribly mediocre and they’re always being held up as paragons of virtue and some sort of measuring stick to humiliate me.
Everything I do is so original and unique and I put so much of myself into it like my book and record and it?s only brought me heartache and pain.

I don’t think I can play the game to be accepted. I’m too intelligent, I have too much pride.

Now, according to the Huffington Post, the letter which was obtained from Madonna’s long time friend, Darlene Lutz will be put up for auction, expecting to reel in between $3,000 to $5,000.

In the wake of the auction, Stone penned a letter of her own, condemning the publishing of the singer’s public letters.

Dear Madonna, First, I think it’s absurd that anyone is publishing your private letters. Therefore; I publish publicly. Know that I am your friend. I have wished to be a rock star in some private moments have felt as mediocre as you described. We know, as only those who have survived so long that owning our own mediocrity is the only way to own our own strengths; to become all that we both have become, she wrote.

I love and adore you; won’t be pitted against you by any invasion of our personal journeys. Sharon.