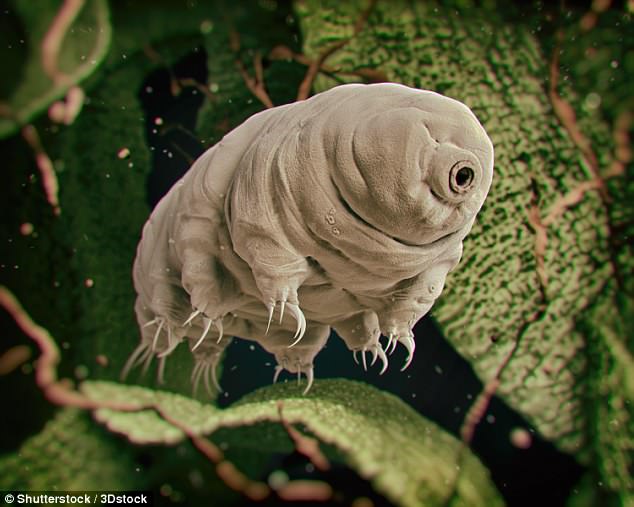 Tardigrades will be the last surviving species on Earth and could live through any doomsday event, scientists have claimed.

Also known as water bears, tardigrades can survive for up to 30 years without food or water and are the toughest creatures on Earth.

Now a new study by Oxford University has found the hardy micro-animals will exist for at least 10 billion years and could live through an asteroid strike or the impact of a close-by exploding star.

The research was designed to determine the extreme conditions under which life might die on Earth – and it could have implications for finding life elsewhere in the solar system.

The eight-legged animals, which grow to about half a centimetre long (0.02 inches), can also withstand temperature extremes of up to 150°C (302°F).

They are also resistant to radiation levels of 5000 to 6200 Gy, which is around the dose used in some forms of chemotherapy.

Researchers from Oxford University have studied the animal’s risk of extinction for a range of astrophysical disasters.

Dr Rafael Alves Batista, a researcher at the department of physics at Oxford University, told MailOnline: ‘The goal is to study what is necessary to kill all life, not just humans.

‘To this end, we have chosen the most resilient form of life we know: tardigrades.

‘The question we want to answer is: what would it take to kill all life on a planet? In order to achieve that, we need something that can kill tardigrades.’

The research found that the tiny creatures could survive an asteroid strike, supernova or a gamma-ray burst, a kind of extreme energetic explosion.

Though all these events would be deadly to humans, none could see off the tardigrades, the researchers found.

Dr Alves Batista said: ‘Without our technology protecting us, humans are a very sensitive species.

‘Subtle changes in our environment impact us dramatically. There are many more resilient species’ on earth.

‘Life on this planet can continue long after humans are gone.’

They concluded that the animals will live on Earth for at least ten billion years, and will only be wiped out when the sun burns out.

Dr David Sloan, a researcher from the department of physics at Oxford University, said: ‘A lot of previous work has focused on ‘doomsday’ scenarios on Earth – astrophysical events like supernovae that could wipe out the human race.

‘Our study instead considered the hardiest species – the tardigrade.

‘As we are now entering a stage of astronomy where we have seen exoplanets and are hoping to soon perform spectroscopy, looking for signatures of life, we should try to see just how fragile this hardiest life is.

To our surprise we found that although nearby supernovae or large asteroid impacts would be catastrophic for people, tardigrades could be unaffected.’

Three potential events were considered as part of their research, including asteroid strikes, exploding stars in the form of supernovae and gamma-ray bursts.

Researchers chose to focus on these events as they are the only known astrophysical phenomena that could end life on Earth.

Because of the tardigrade’s unique biological characteristics, they could only die off if all the world’s oceans were boiled during a doomsday event, the researchers said

WHAT DOOMSDAY EVENTS COULD THE TARDIGRADE LIVE THROUGH?

Three potential events were considered as part of their research, including asteroid strikes, exploding stars in the form of supernovae and gamma-ray bursts.

Because of the tardigrade’s unique characteristics, they could only die off if all the world’s oceans were boiled during a doomsday event, the researchers said.

They reasoned that there are only a dozen known asteroids and dwarf planets with enough mass to boil the oceans, these include Vesta and Pluto.

However none of these objects will intersect the Earth’s orbit and pose a threat to tardigrades, the researchers found.

In order for an exploding star to to boil the oceans, it would need to be around 0.14 light-years away from Earth, the researchers found.

But the closest star to the sun is four light-years away and the probability of a massive star exploding close enough to Earth to kill all forms of life is negligible, they found.

Gamma-ray bursts are brighter and rarer than supernovae.

Much like supernovas, gamma-ray bursts are too far away from earth to be considered a viable threat.