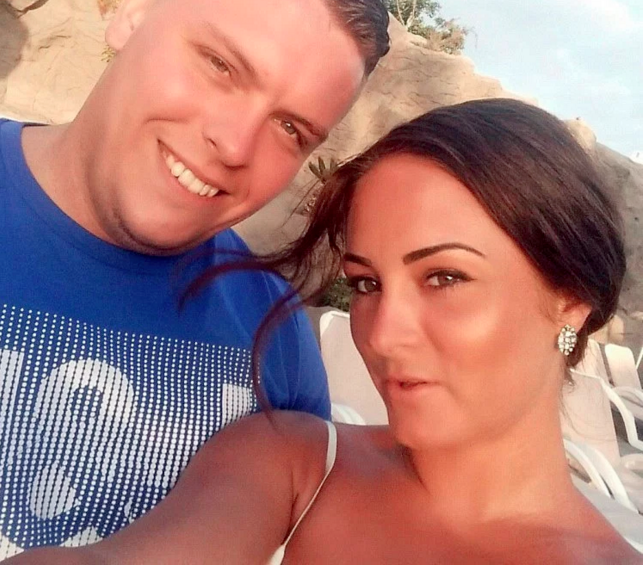 Kirsty Hargreaves pursued a police car containing Michael Mowforth after he begged them to help him leave her.

But she refused to let him get away and dangerously chased the West Yorkshire Police vehicle in her car.

Hargreaves caused oncoming cars to swerve as she crossed white lines and drove alongside the unmarked police car… because she wanted to persuade her partner not to leave, Leeds Crown Court heard.

She followed Mowforth from Rothwell to Elland Road Police Station before hitting the police car after following it through a security barrier in the early hours of March 27.

A female officer suffered a chest injury when she was pushed into a barrier while trying in vain to stop Hargreaves running into the police station.

She was jailed for ten months and handed an 18-month driving ban.

Prosecutor Carmel Pearson said police were called to Hargreaves’ home to arrest Mr Mowforth, a scaffolder, after she alleged he had assaulted her.

He was taken into custody before Hargreaves called police to say she had made up the allegation.

Miss Pearson said: ‘He confided in officers that he wanted the relationship between him and the defendant to end.

‘He was upset in the police station and police very kindly helped him and said they would take him to Leeds housing to see if they could find accommodation for him.’

Police took the man back to the address in Rothwell where he told Hargreaves he was leaving her.

Miss Pearson said: ‘He told her and she became upset as predicted.

‘There was a bit of a scene in the house where she tried to persuade him to stay. He asked officers to take him away, that’s when the driving began.’

Mitigating, Anthony Sugare, said: ‘All she was trying to do was get to her boyfriend and try and persuade him not to leave her.

‘There has been an enormous love, hate relationship between them for a long period of time. I am told they are living apart but are still very close friends.’

The couple have now made up and Mr Mowforth is planning to visit Hargreaves behind bars.