Kim Kardashian has hit back at her critics after photos of North West wearing a dress that looks like a corset prompted outrage on social media.

Shocked users had earlier questioned why the reality star  and her husband Kanyelet their four-year-old daughter step out in the accessory.

North can be seen in photos taken earlier this week walking on the street in New York in what looked like a corset on top of a peach-colored dress. The outfit, which has a purple flower on it, wraps loosely around her chest and has laces crisscrossing in the front.

Kim said on Wednesday night the dress just looks like a corset and ‘she would never’ put her daughter in one.

‘This dress that I did not design, I actually bought, is not a corset it’s just fabric on the front,’ she said in a video. 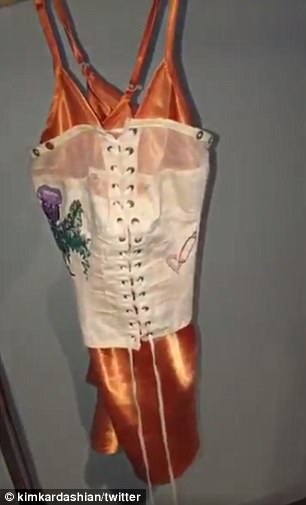 ‘So, I think it’s really cute, I bought it from a designer and it’s just fabric people, it’s not a real corset.’

She also tweeted: ‘I would never put my daughter in a corset! Relax it’s a dress I bought that is fabric that laces up and looks like a corset!’