Since he started puberty, Katie has been wondering what will happen in his romantic life and whether or not she should introduce sex to him and during a discussion with Kieran the pair did talk about whether it would be a good idea to hire a woman to take his virginity when he reaches adulthood.

Katie made her confession during a panel discussion on Loose Women with authorKathy Lette and her autistic son Jules Robertson, whom she contemplated hiring a prostitute for when he was 20 because he couldn’t find a girlfriend.

Talking directly to Kathy, mother-of-five Katie said: ‘My son Harvey has got autism and he’s now 15 and naturally at 15 you go through puberty and it’s natural to experiment with yourself. I had read what you said you would do. 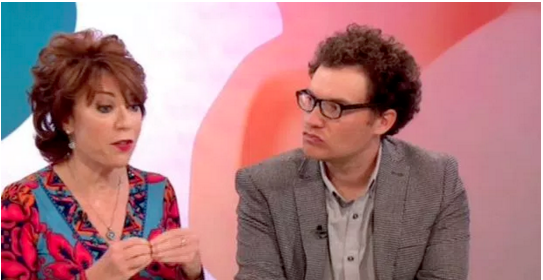 ‘Your son is high functioning with autism but Harvey is the different end of spectrum, so is it fair for him to experience it (sex)? “We sort of joked about it, and Kieran said, ‘Shall we get him a prostitute for his 18th birthday? For me, that’s my little Harvey and he hasn’t got a clue about those things, but what do you do?

‘Should you bring it on, I don’t know in my situation, what should I do? Do I leave it or should I let him experience it (sex)?’

Kathy then answered: ‘I think you wait and see if he’s angst ridden about it and if it’s an issue for him. And for Jules it really was.’

During the discussion, Loose Women was momentarily hampered by ‘technical difficulties’ and taken off air for a brief moment.