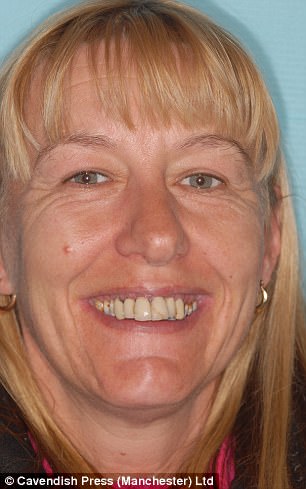 A bride who used superglue to repair her own teeth because she was so terrified of the dentist has overcome her fear to undergo £25,000 worth of cosmetic surgery for her wedding day.

Mavis Nelson-Chapman, 47, from Gateshead, Tyne and Wear, cracked her front tooth while on holiday, but resorted to repairing the damage with a spot of DIY.

But after deciding to marry her partner Stephen, she decided to pay for an expensive cosmetic procedure in order to get a perfect set of teeth.

Mavis explained that her phobia of going to the dentist began as a child, when she had a traumatic experience that left her in complete ‘agony’.

However, she was determined to get her smile repaired as she was ‘desperate’ to look nice on her wedding day.

She and Stephen – who have been together for 18 years – decided to get married after he was diagnosed with cancer, meaning their big day held extra significance.

‘I was so self conscious about my teeth at this point and I was desperate for them to look nice on my wedding – this was going to be the biggest day of my life,’ she said.

‘It was also massively important because of Stephen’s illness. The wedding photos and video took on even more significance for us.’

Mavis had first chipped her two front teeth when she tripped and fell over as a teenager.

Despite having them fixed at the time, they later cracked again while she was on holiday with her husband in Lanzaronte.

Mavis said: ‘My teeth just seemed to fall to pieces.

‘The caps on my two front teeth started to fall out all the time and become cracked, and I was constantly going back to the dentist to get them re-glued.