A former army paramedic-turned-dominatrix has revealed how she was forced to hide her disfigured rear end in her sexy outfits after botched implant surgery left her with painful, rock hard buttocks just months after the procedure.

Refusing to let the botched procedure destroy her dreams, Elena changed her career and become an S&M specialist – but continued to suffer from a ‘droopy’ bottom, eventually realizing that the Mexican surgeon had put ‘jelly’ breast implants put into her buttocks

Refusing to allow the botched surgery to stop her from forging ahead with her new career Elena would perform for clients wearing clothes that would hide her disfigured behind and says she rarely felt sexy.

And after several years of feeling miserable about her derriere, she decided to seek the help of doctors on E reality show Botched, which specializes in correcting bad plastic surgery.

She told plastic surgery whizzes Dr Terry Dubrow and Dr Paul Nassif: ‘Everything was great when I first got them,’ before explaining that her happiness about her new behind lasted just a few short months.

It was then that the implants began to become completely misshapen and ‘droopy’, while also hardening under the skin and leaving her in pain every time she sat down.

To add insult to injury, Elena’s confidence was totally shattered by the appearance of her buttocks, and she admitted that it was hard for her to give her job 100 per cent.

‘I was miserable because I didn’t feel sexy,’ she told the doctors. ‘In my profession, that’s a huge problem.’ 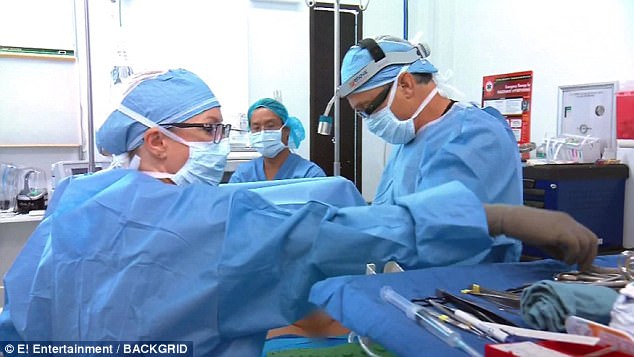 After learning of her issues, both Dr Dubrow and Dr Nassif immediately questioned whether Elena had actually been given buttock implants – or whether the surgeon in Mexico had given her breast implants, something which is common practice among less-than-stellar doctors.

‘That’s a very good question,’ Elena responded when the Botched doctors questioned her about whether her implants were actually supposed to be used in the buttocks.

‘These were jelly implants,’ she added, prompting Dr Dubrow to respond: ‘When you say jelly, you mean breast implants?’

Elena replied: ‘I don’t know what’s in there!’

The doctors explained that the former paramedic was probably suffering from silicone granuloma, a foreign body response to ruptured silicone, which they felt was responsible for all of her symptoms – from the disfigured appearance of her rear end, to the pain she was suffering whenever she tried to sit down.

Elena asked the doctors to try and repair her behind, beginning with a physical examination of her buttocks, during which Dr Dubrow explained that he would be able to correct the botched procedure with another round of surgery, removing the initial implants and replacing them with the correct type, which would help to repair the shape of her bottom.

‘Oh my god, look at that butt!’ one of them exclaimed, while the other was only able to gasp in shock at Elena’s new booty.

‘Before my surgery, my implants were a huge pain in the a**,’ Elena joked about her transformed buttocks. ‘But now the droopiness is gone and you can’t see the incision scars at all.

‘I even have a slimmer waist, which means even sexier outfits.’

She went on to pay tribute to Dr Dubrow for his determination to transform the botched buttocks, saying: ‘My [new] a** is fantastic. Dr Dubrow really whipped it into shape!’