Bone-sniffing dogs may have found the lonely spot on an deserted island where Amelia Earhart died as a castaway.

Four border collies sniffed out the lingering scent of human remains that researchers believe could have belonged to the missing aviator or her navigator Fred Noonan.

The canines are trained to detect bones and the scent of remains, and previously this method has unearthed ancient burial sites that are nine feet deep.

The dogs pointed to a shaded spot underneath a tree on the isolated island of Nikumaroro, the same spot where British officials found bones they believed belonged to 39-year-old Earhart in 1940.

This new discovery casts doubt over a recently unearthed vintage photograph that some experts claim is proof that Earhart and Noonan survived their crash landing and were captured by the Japanese.

The recent expedition was funded by National Geographic and carried out by a team of researchers at the International Group for Historic Aircraft Recovery on June 30.

The dogs are trained by the Institute for Canine Forensicswere (ICF) and were released individually, to see if they could find any indication of remains.

If the scent of human bones is found, the canines are trained to sit or lie down with their paws on either side of the location where the smell is the most intense, reported National Geographic.

One by one, all four dogs indicated to their handlers there was evidence of human remains at the same exact spot underneath a tree.

The researchers concluded: ‘The signals were clear: Someone — perhaps Earhart or her navigator, Fred Noonan — had died beneath the ren tree.’

This spot the dogs pinpointed is the same area where an official claimed to have found castaway bones under a ren tree in 1940.

The official believed they belonged to Earhart and the 13 bones where shipped off to Fiji to be measured. The bones were lost after they were measured.

In 1998, the International Group for Historic Aircraft Recovery obtained the original files of the skeleton’s measurements and sent them to forensic anthropologists.

In a statement, the analysts wrote: ‘The morphology of the recovered bones, insofar as we can tell by applying contemporary forensic methods to measurements taken at the time, appears consistent with a female of Earhart’s height and ethnic origin.’

Then in 2016, another discovery revealed the skeleton had unusually large forearms, and analysts confirmed they were an exact match for Earhart’s. 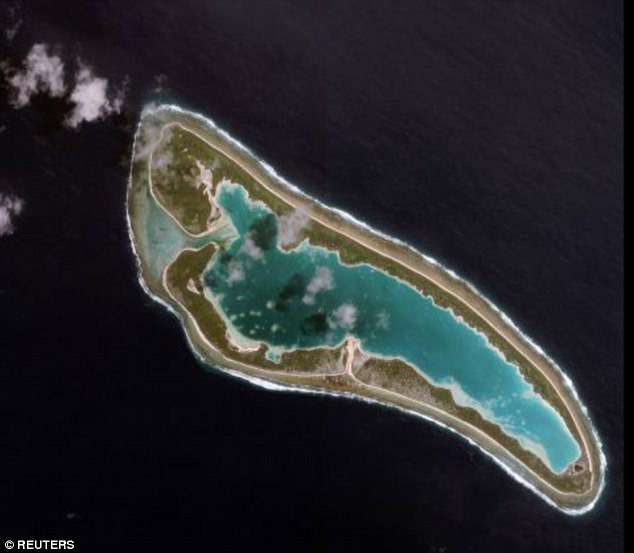 Nikumaroro, then called Gardner Island, is 350 nautical miles from Howland Island, the spot where Earhart was on her way to when she vanished on July 2, 1937.

It has long been believed that poor visibility and low gas levels caused the plane to crash in the waters nearby the island, but the exact location of where has never been solved.

News of the remains comes as a vintage photograph allegedly shows Earhart and Noonan after they crashed, some experts claim.

The photo in question appears to show both Earhart and Noonan in the Marshall Islands, with a note on the image placing them at the Jaluit Atoll.

Jaluit Atoll is more than a thousand of miles away from Nikumaroro island.

Earhart’s plane can also be seen on the far right being dragged by a large ship.

The image is believed to have been taken in 1937, the same year that Earhart went missing in the vicinity of the island chain.

The photograph also backs up the long-held belief that Earhart was captured by the Japanese and held as a prisoner of war, this according to experts who will appear on the History special Amelia Earhart: The Lost Evidence.

After this vintage photo recently circled the internet, a woman stepped forward and claimed that she had seen Earhart being captured by the Japanese.

Josephine Blanco Akiyama, now a resident of California, was 12 years old when she claims to have seen Earhart being hauled away by the Japanese in Saipan in July 1937 after the aviator is believed to have crashed her plane into the Pacific Ocean.

Akiyama’s claims have added yet another element to the mystery of Earhart’s disappearance while she was attempting the first round-the-world flight 80 years ago this month.

‘I didn’t even know it’s a woman, I thought it’s a man,’ Akiyama told NBC’s Today on Thursday.

Akiyama claims she later learned Earhart had been executed.

Theory One: Amelia Earhart and Fred Noonan crash into the Pacific a few miles short of their intended destination due to visibility and gas problems, and die instantly.

Theory Two: Earhart and Noonan crash land on the island of Nikumaroro, where they later die at the hands of coconut crabs, which hunt for food at night and grow up to three-feet long. The name comes from their ability to opened the hardened shells of coconuts.

Theory Three: Earhart and Noonan veer drastically off course and crash land near the Mili Atoll in the Marshall Islands. They are rescued but soon taken as prisoners of war by the Japanese and sent to a camp in Saipan. Noonan is beheaded and Earhart dies in 1939 from malaria or dysentery.

Theory Four: Earhart and Noonan make it to Howland Island as planed and are eaten by cannibals.

Theory Five:  Earhart was an American spy sent to gather information on the Japanese ahead of World War I