Italian millionaire, Gianluca Vacchi, became an internet sensation after a video of him emerging from a freezing anti-aging chamber in tight underwear before breaking into seductive dance moves went viral.

Prior to that, there had been a video of him dancing on a luxury yacht with his girlfriend. Vacchi, known for being a successful businessman who is not shy about displaying his dance moves & toned torso, was spotted strutting along the Miami beach on Saturday wearing tiny white swimming shorts.

Apart from his skimpy swimming shorts, the buff millionaire had on silver ankle jewelry on both ankles. The rest of his body was covered in tattoos and he seemed to be in high spirits as he emerged from the sea.

Gianluca, who heads up the manufacturing company SEA Società Europea Autocaravan, has an estimated net worth of 300 million dollars, and is a life coach as well as an entrepreneur. 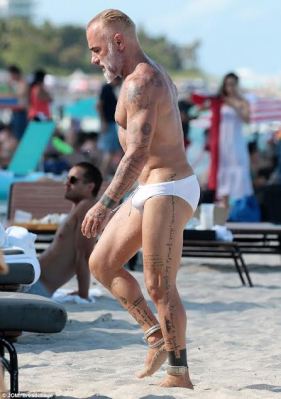